Pls note this post was created during my executive language course with EF in Cambridge, allthough my pub studies were done outside classes 😉

Cambridge University has produced 115 Nobel Prizes. Several of the brightest ideas are said to have been born in the pubs of Cambridge, although we all know that decades of research lie behind each prize. 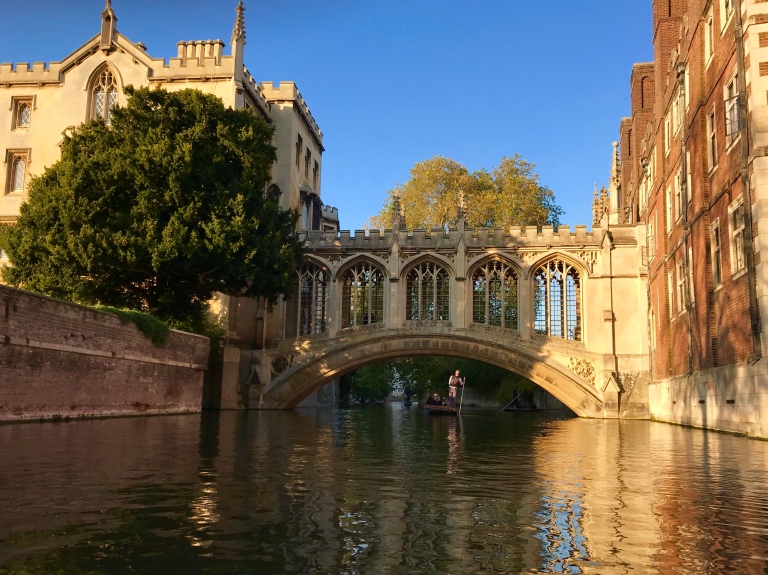 It’s claimed that the Nobel Prize of Medicine for the discovery of DNA, “the secret of life”, and the shape of DNA as a double helix, was born during a wet lunch at Cambridge’s most famous pub; The Eagle. Or at least, it was first announced during such a lunch at the Eagle.

All over Britain, the local pub is an institution as central to British culture as horizontal  rain, rose gardens, afternoon tea and tweed.

In contrast to the climate, most Brits still cherish their pub; one of the few surviving institutions, where you may lower your guard, say what you like – and enjoy a jolly good pint of ale. 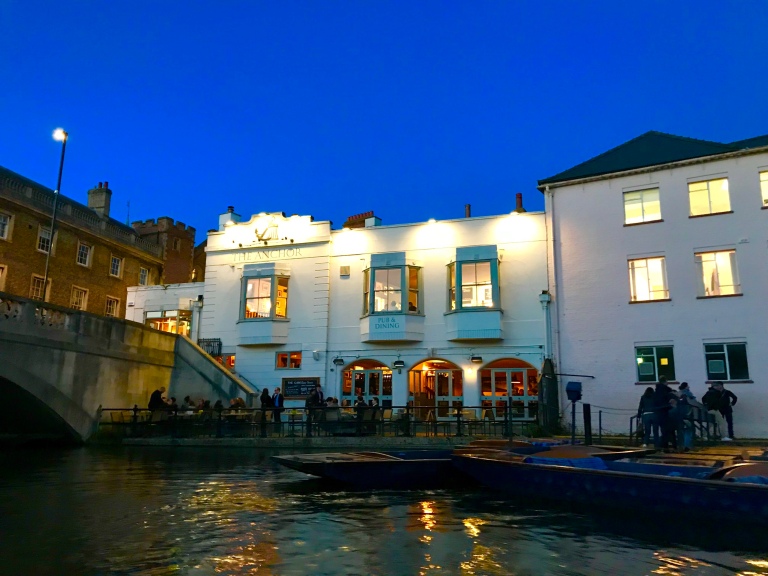 In Cambridge, the intellectual aspect is another great reason for visiting the pubs. And there is yet another good excuse to rush to the local Cambridge pubs: the beer.

Britain is surging from relatively mediocre levels when it comes to variety and quality of beer: as recently as 30 years ago, a few large beer producers dominated with rather standardized products, delivering a  narrow product range to most pubs across the country.

Today, it’s no secret that Britain’s micro breweries are booming, as thirst for varied quality craft beer continues to grow. Beer lovers get the same sparkle in their eyes as wine savvies when discussing local production, variations in taste and complexity.

Beer lovers are now happily engaged in the constant search for the craft ale which defines their own personality and taste. In Cambridge, many pubs provide samples in shot glasses, in order to facilitate the  visitors choice of his or her favorite beer, or cider.

So here are some recommended Cambridge pubs, awarded with the very special  Cambridge Nobel Price for genuine and cozy pubs. The Pub Prize was recently installed thanks to the cancelled Nobel Prize in literature 2018, leaving some space for the creative and thirsty craft beer jury, with special thanks to Master Graham at EF Executive Language Institute.

Apart from the discovery of DNA, The Eagle is as famous for it’s connection to World War II USAF and RAF pilots. You still find a tremendous amount of military artifacts here, and most notably the ceiling’s cigarette lighter marks made by young second world war pilots in the inner room. There are open fireplaces, visible beams and intimate corners everywhere.

From the beer garden you can see the permanently open window on the second floor, where the ghost of a poor woman who died in a fire up there wants to be able to get out of the room. Why British pub ghost can’t move through walls and closed windows, I don’t know.  The open-window requirement is anyhow stated in the tenant’s contract for the Eagle. 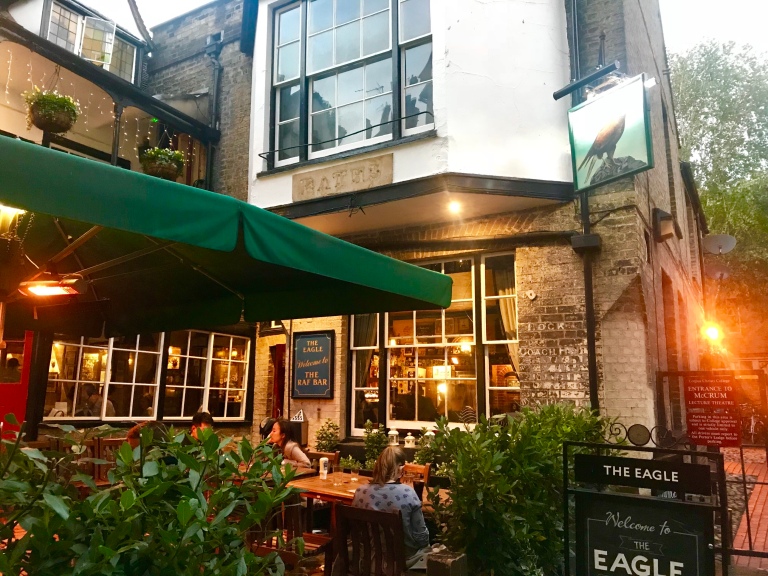 The Mill is centrally located, but still offers a country pub feeling thanks to its location on the grassy banks of the River Cam, overlooking the Millpond and grazing cows in the neighboring park Laundress Green, The Mill is an iconic Cambridge pub, and yes, the building did serve as a mill in the 19th century. 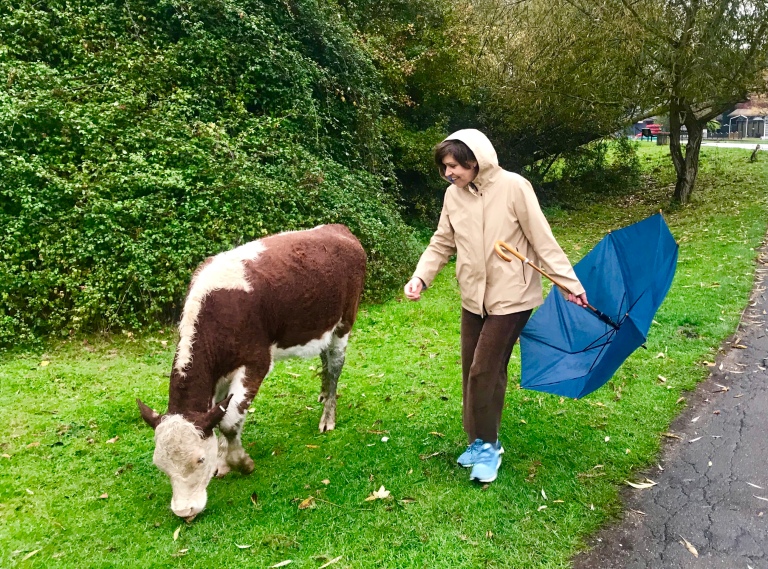 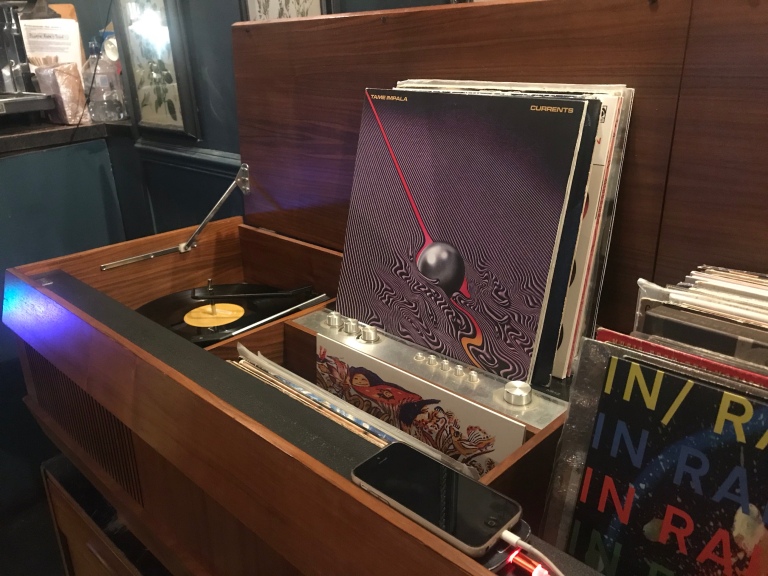 Today, The Mill is known for its choice of well-kept real ales, and the simple fact that “all” young students – and quite a few professors – gather here in summer, buy a take away-pint and some food in order to enjoy warm evenings in the park.

In winter, visitors sit down by the fireplaces in the small rooms that The Mill consists of. You may play board games. and nostalgics can go down memory lane enjoying old favorites on vinyl; The Mill has a radiogram on the right hand side of the bar.

The Live and Let Live is a quirky, old fashioned so-called ‘drinkers pub’, with hardly any tourists. There is no food served, and hardly any women around, by the way. Peter, the owner, keeps his beers down in the cellar and is a purist when it comes to beer, and insists on flushing the pipes every time he changes the barrels.

We are just off Mill Road, which is outside the Cambridge city center, on a discreet corner, at the end of the block. The interior is quite shabby, in a cosy, welcoming way. The Live and let live is furnished with simple tables and chairs plus a few barstools at the end of the wooden bar.

Wood paneling and railway posters add to the 1970’s atmosphere. This is a pub for conversation, ale and cider consumption. Nethergate Umbel Ale is a regular, as well as Oakham Citra. There is often a second Oakham beer on, and always a mild or stout, plus three changing ciders. The risk of The Live and Let Live being gastro-ized is close to zero. 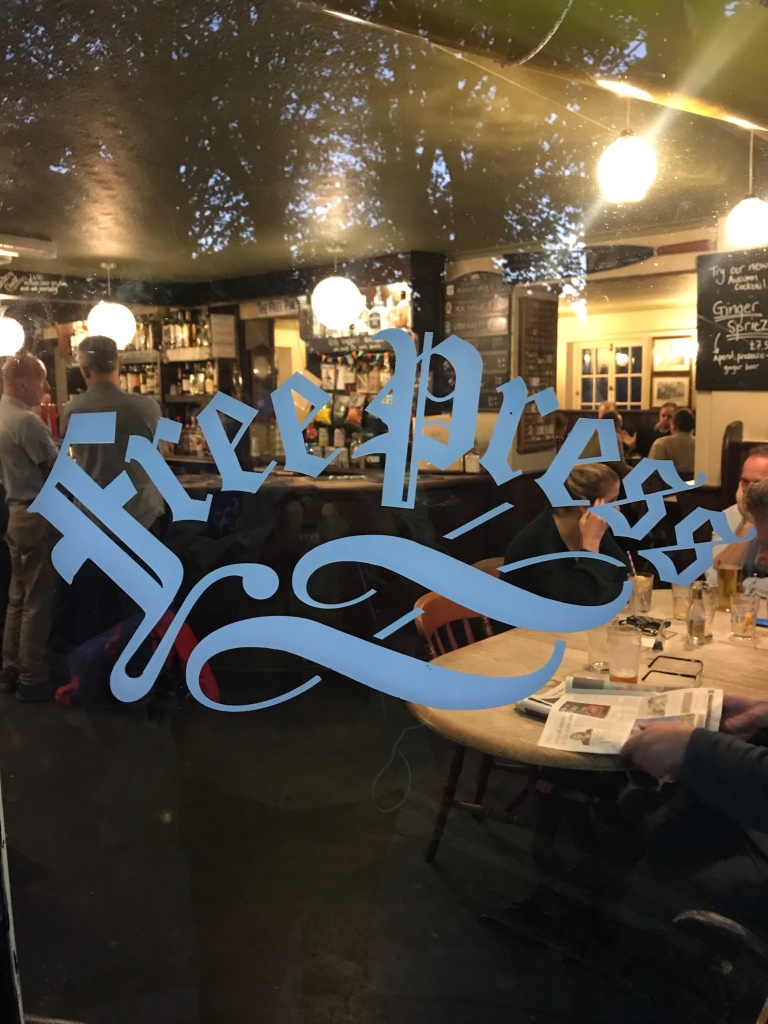 The Free Press is a traditional backstreet pub, with a convivial atmosphere and locals who seem to be in endless conversations. The Free Press serves up to six well-kept ales and has two fireplaces. Some homemade food is served – the Scotch Eggs are legendary; the recipe features in the Cambridgeshire Cook Book which is on sale at the bar. 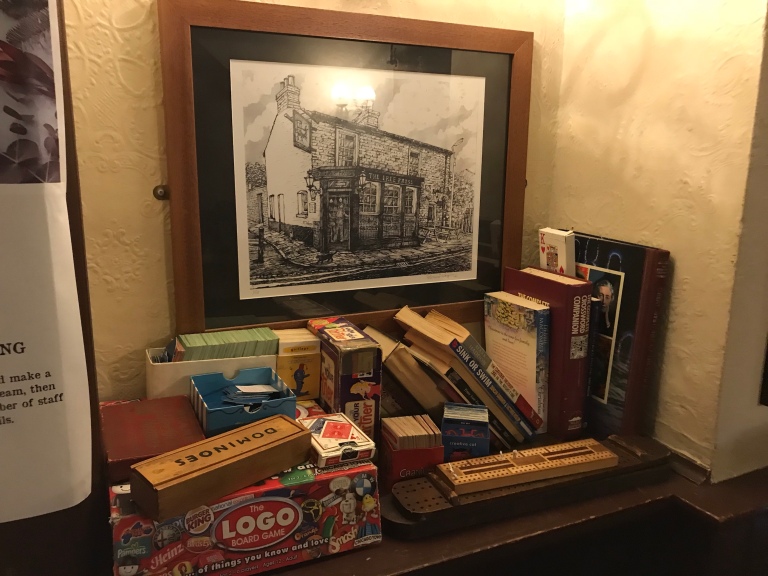 Quoting from the pub’s web site: “The Free Press was first licenced in 1834 when a home brewer, Sarah Horne, opened up her cottage to serve her very own home brew. Just as she was setting up shop, the teetotal movement launched a paper called ‘The Free Press’ to campaign against drinking. Sarah named her pub after the paper in irony. The paper lasted just one issue, the pub nearly two centuries.” 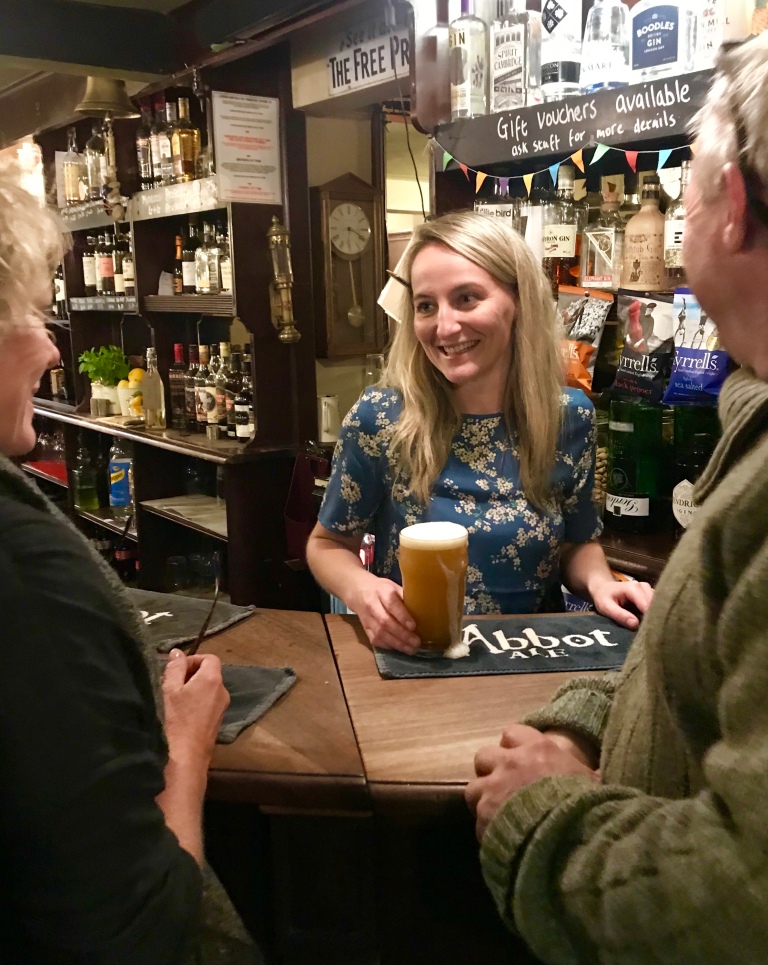 The walls feature old newspapers, typesetting trays which customers are encouraged to fill with their own curios, while in the main bar hangs the bow of the Cambridge boat destroyed after hitting a barge at the start of the 1984 Boat Race. Some former students are still said to come along every now and then to cheer the boat. 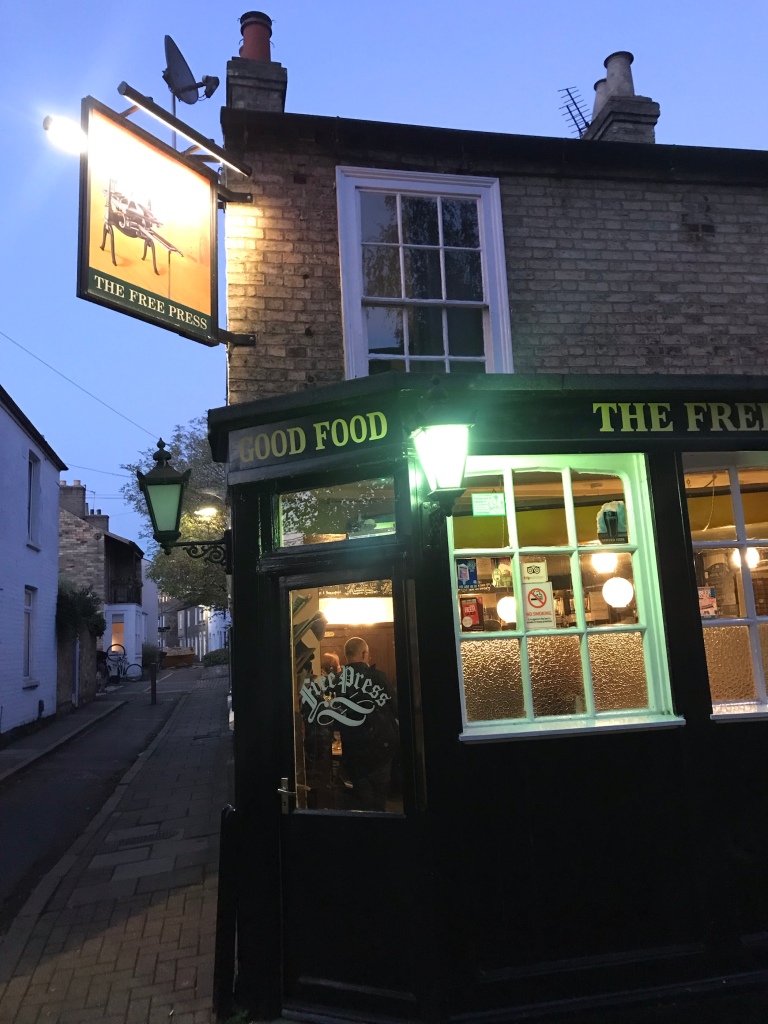 Not far from The Free Press, you’ll find another tiny, old-fashioned and homely pub under the name The Elm Tree. Again, you won’t get further away from the pub chains than in this quirky, small and bric-a-brac filled pub. Every shelf is stacked with memorabilia, the walls and ceiling covered with pub related imagery.

Sometimes, there is live folk, blues and country music, but most of the time, there is just the sound of people talking to each other, enjoying themselves. Ten microbrewed real ales are served, a large selection of Belgian beer as well as traditional ciders. 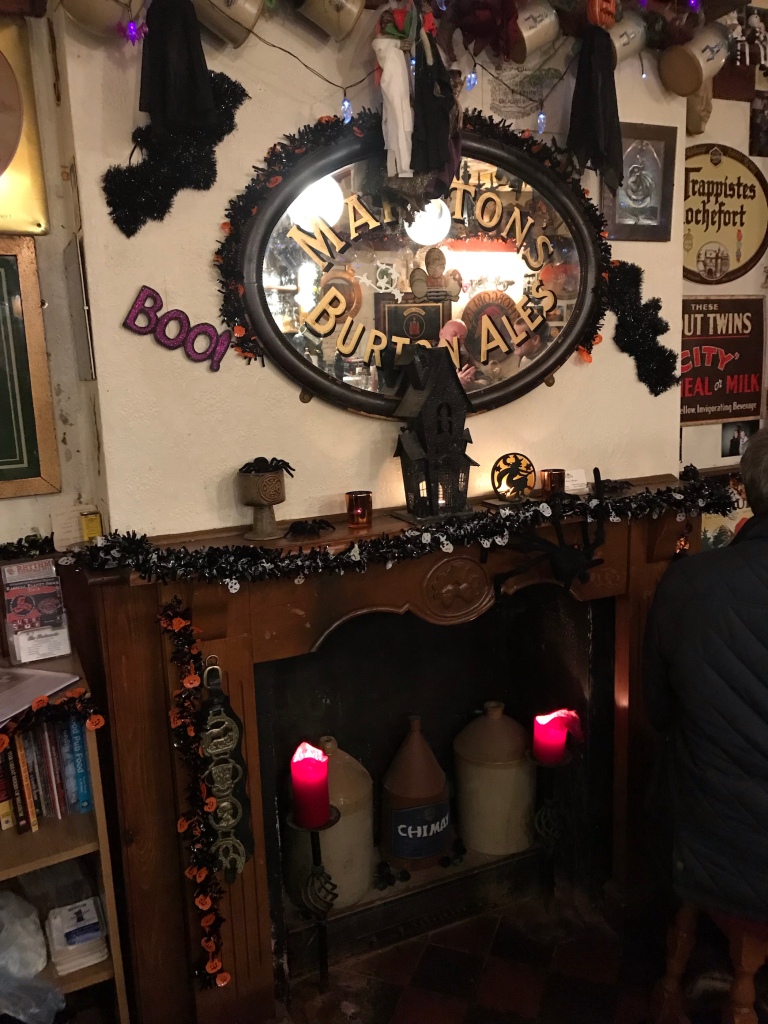 A student in microbiology helps us get back to the supposedly intellectual theme of the Cambridge pubs, telling us this story:

“I would meet my molecular biology mentor a few times each month at The Elm Tree. Once, he received a call from his mate, Elizabeth Blackburn, to tell my mentor she had won the Nobel Prize for her work on telomeres, fantastic memories!”

For those who manage 😉 to finish the pub crawl with dinner, I strongly recommend The Ivy and Parker’s Tavern, both serving british classics with a twist.